One, Two, Three – POP!
An interview with Calvin Dyck, director Symphony by the Sea
By Rosemary Phillips 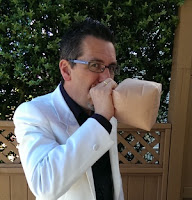 Violinist Calvin Dyck, also known as the illustrious concertmaster for the Vancouver Island Symphony (VIS), and a man of many hats, is embarking upon yet another big adventure – the programming and directing of the third summertime pops concert - Symphony by the Sea, scheduled for Maffeo Sutton Park in Nanaimo on Saturday, August 8 at 6 p.m. - rain or shine!


Yes, the Hats are Back (Calvin) and the Guy with the Tie (fabulous tenor and storyteller Ken Lavigne) for another great outdoor performance. At the time of this interview Calvin was diligently finalizing the program so he could go away for a short holiday. “This week Heather and I are celebrating our 20th wedding anniversary,” he said, lovingly putting on his family-hat. “Our children, Christine and Andrew, are now almost-adults. We’d like to squeeze in a little vacation before the concert.”


But, back to Calvin in his producer-hat and his focus on the upcoming concert, the music, and talented guests which include Ken Lavigne, pianist child-prodigy Kevin Chen, the Vancouver Island Symphony, O’Connor-O’Brien School of Irish Dance, the return of the Paper Bag 1812 Overture – and surprises! Calvin’s aim is to always make music exciting, entertaining and enjoyable for every age and taste.


Symphony by the Sea: 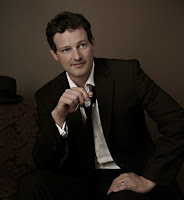 Ken Lavigne is a real crowd pleaser. He is loved by audiences for his soaring, honeyed tenor voice, his choice of popular songs, his adventures and courage to follow dreams, and his natural, humorous banter. “He will be singing Music of the Night from Phantom of the Opera, plus favourites like Nessum Dorma, Granada, Funiculì Funiculà,” explained Calvin. “And, because he’s fulfilling another dream and heading to the Sydney Opera House in Australia, he’ll be having the audience join in for a sing-along version of Waltzing Matilda. For added fun, we will be continuing the new tradition of giving away Ken’s tie - and one of my hats.”

Kevin Chen, a ten-year-old short, shy, child-prodigy pianist and composer, has been a solo guest artist with orchestras since he was seven years old. “He will be performing movements from Mendelssohn’s Piano Concerto No. 1, and Mozart’s Piano Concerto No. 21 (made popular in the 1960’s by the movie Elvira Madigan) and the world premiere performance of his Symphony No. 3. I just got it in the mail the other night. Tom Lee is bringing a grand piano all the way from Victoria specifically for Kevin and this event.”
In 2013, Kevin was named one of CBC’s Top 30 Hot Canadian Classical Musicians under 30 - and he was only eight. Added Calvin, “This spring he made his debut with the Calgary Philharmonic Orchestra and this fall Maclean’s Magazine is featuring Kevin for their 110th year edition as they present 110 Canadians, one for each year.”
One, Two, Three – POP! The return of the Paper Bag 1812 Overture - “After last summer’s wonderfully successful performance we are bringing the Paper Bag 1812 Overture back, by popular demand. I’ll be demonstrating the ‘One, Two, Three – POP’ right before intermission, then volunteers will hand out about 3,000 lunch bags throughout the audience so everyone can join in and help make a very satisfying Paper Bag Cannon Boom during the grand finale.”
(You might want to have a practice at home if you have any lunch bags. It’s surprising how loud the pop can be.)
More pops music - “The VIS will be opening with the Light Cavalry Overture, which will be delightful. The O’Connor-O’Brien School of Irish Dance will perform to Lord of the Dance. In addition to Ken’s powerful selection of songs, we will be playing the Mission Impossible theme, Seafarer by Haydn Wood, the Blue Danube Waltz by Strauss, a few surprise pieces, and Lara’s Theme from the movie Dr. Zhivago, in memory of Omar Sharif who passed away on July 10.”
Sponsors - Calvin is forever thankful for the support he receives. “We couldn’t put this concert on without help from our performance sponsors and audience. Windsor Plywood, Columbia Cabinets, Rotary, and the City of Nanaimo have been such huge supporters from the beginning. This year Thrifty Foods is on board with food for sale. This is a first and we are really pleased to have them join us. Of course, we gratefully accept donations from the audience to help defray the costs of the event.”
Calvin Dyck:

Calvin’s first performance with the VIS was for Symphony on the Green on Gabriola Island. “When I was recruited to play it was for a two-year contract. I said ‘no’ and agreed to one-year.” Calvin then paused and chuckled, “This is my 16th season. Where do the years go?”
Symphony on the Green became Symphony in the Harbour and is now Symphony by the Sea. And just as the VIS and its programs have changed and evolved (first under the baton of Marlin Wolfe then Pierre Simard) to become a jewel of a professional regional orchestra, so has Calvin grown into a dynamic musician and director who turns everything he touches into wondrous success.
Besides fulfilling his role as concertmaster with passion and joy, he has been integral in introducing new ventures and concert ideas for the orchestra. “I really enjoy working with Pierre, and, unlike a top-down organization, the VIS, Pierre and executive director Margot Holmes, empower musicians to run with their own ideas,” added Calvin. “They have been very supportive in bringing back the summer pops concert and in giving me the opportunity to conduct the orchestra for these shows. The first year was a bit of an experiment, as I did it mostly myself, assisted by Ken, the guest artists, and musicians who took a reduced fee to help make it a success. There were 1800 in the audience. Last year the crowds came back and brought along friends, and we counted about 4000. This year it’s going to be an even greater success!”
So come on down and pop a paper bag at Symphony By the Sea - Be sure to come early and reserve your patch of grass, enjoy the Sea Walk, kids’ park and beach; venture along the beautiful waterfront and wander into Downtown Nanaimo and exquisite shops. Make it a total family day followed by great entertainment, awesome music, and as always with our sensational Calvin Dyck – hats and SURPRISES!
For more information on Symphony by the Sea phone 250-754-0177 or visit www.vancouverislandsymphony.com.
For more extensive information about Calvin and his many hats, including director of the Abbotsford Youth Orchestra and Virtuosi, visit www.calvindyck.com and www.quillsquotesandnotes.com/ws-dyck.htm.
Posted by Rosemary Phillips at 9:53 AM