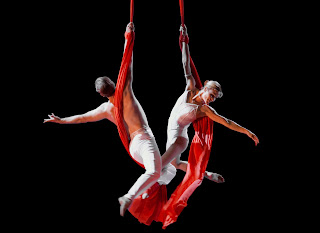 Thrilling, bedazzling –
a show like no other!
Cirque de la Symphonie, featuring world-class aerialists and acrobats, is the ONLY known company that performs thrilling and bedazzling feats over and in front of a LIVE symphony orchestra. And to be sure that as many people as possible experience this amazing phenomenon, the Vancouver Island Symphony presents Cirque de la Symphony in two shows at the Port Theatre on Saturday, November 17 - at 3 p.m. and 7:30 p.m.

Music you can feel
There’s music to stir the soul with emotion and melody: music that glides like the aerialists as they fly from the rafters; spins like juggling balls, batons and rings; and flows like silks and ribbons. It’s light classical and popular film music – familiar yet electrifying: from Stravinsky (Circus Polka) to Bizet (Carmen), Khachaturian (Masquerade), Saint-Saens (Dance Macabre – you’ll recognize it right away – spine-chilling!), Tchaikovsky (Swan Lake), Rimsky-Korsakov (Scheherazade), Respighi/Rossini (Cancan) and Smetana (Dance of the Comedians).

World class artistic movement
The artists are truly amazing. Streltsov, gold-medal winner at the prestigious Festival Mondial Du Cirque De L’Avenir in Paris, has performed for three Russian presidents, the Bolshoi Ballet, and elaborate theatre, stage and television productions world-wide. Van Loom is a seven-time consecutive US National Champion, Female Olympic Athlete of the Year and Athlete of the Decade in gymnastics. Tsarkov, a graduate from Russia’s prestigious State College of Circus and Theatre Arts, and veteran of Circus Circus and Cirque Ingenieux, is a favourite of the younger audience members. Tsarkova, the ‘Lady in White’, graduated from the famed Moscow Circus School, was a winner at the prestigious National Russian Circus Festival, and has been a major star with Circus Circus, Circus Knie and Circus Roncalli.

The power of LIVE music
How does it feel flying over an orchestra while they play? Says fearless Van Loo “It feels free, empowering, exciting! I don’t just hear the music, I feel it coming into me. I feel strong, happy and excited. It is much more powerful than performing to recorded music.”
This is a spectacular symphony experience like no other! Tickets are available by calling 250-754-8550. Family 4 Ticket Pack (2 Adults/ 2 Youth) for 3 p.m. Show; Group Tickets available. www.vancouverislandsymphony.com  Keeping Music LIVE!

For more information about the artists visit www.cirquedelasymphonie.com.

Posted by Rosemary Phillips at 10:00 AM No comments:

Women of Note with the Vancouver Island Symphony


Celebrating Arts and Culture in Nanaimo and Area


Women of Note (notable women who believe in the arts) have returned and their first new artistic endeavour is a delectable luncheon on Thursday, November 1, at the Nanaimo Museum. Sponsored by the Vancouver Island Symphony, the luncheon begins with networking at 11:30 a.m. followed by creative eats and great company in the surrounds of the ‘Spirit of Life’ fibre-arts exhibit. Special guest Sasha Angus, CEO of the Nanaimo Economic Development Corporation, will speak on ‘The Value of the Arts in Nanaimo’.


“We are so excited to have Women of Note back in action,” says co-chair Marianne Turley. “We are coming together to celebrate, support and create an awareness of arts and culture in Nanaimo.”


In 2008, Nanaimo was given the title of Cultural Capital of Canada, and in 2011 Commercial Street, home to several arts organizations, ranked number one in the ‘Great Streets’ category in the Canadian Institute of Planners ‘Great Places in Canada’ contest.


Adds Turley, “The City has recognized and embraces the importance of arts and culture in the community. They are economic drivers and give a community soul.”


Tickets for this delicious event are $32 and can be purchased through the VI Symphony Office, 250-754-0177 and by e-mailing admin@vancouverislandsymphony.com. Funds raised support the VI Symphony’s Education Shows in 2013.
Posted by Rosemary Phillips at 10:35 PM No comments: 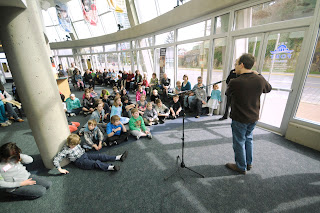 Music is Life. Live it Here!
A ‘Come As You Are’ – FREE Symphony Community Day


Music is everywhere, it is part of life, and to show how it is made the Vancouver Island Symphony is hosting Symphony Community Day on Saturday, October 20 from 11 a.m. to 1:30 p.m. at the Port Theatre – and it’s FREE! It’s a ‘come as you are’ event – from shopping at the grocery store, visiting the library, having coffee with friends and neighbours, or straight off the soccer field or from the swimming pool. No need to get dressed up to come to the Symphony; it’s a rehearsal day and the musicians are relaxed and casual too!


Musical Instrument Zoo (11 a.m. - 12 noon) - First up is this really popular event that helps youngsters find out what different instruments sound like. Kids get to meet VI Symphony pro-musicians who are on hand to help them play everything from a violin to a cello, flute, trumpet, tuba, bassoon, oboe, French horn, bass and percussion. Have a puff, toot and hoot, pull a bow, zing some strings, and have some fun!


NoteworthyKids Family Event (11:45 a.m. - 12:15 p.m.) - Then it’s time to Meet a Musician. The whole family and anyone interested can come along to hear cellist and NoteworthyKids artistic coordinator Joel Stobbe talk about the exciting NoteworthyKids’ activities for the season. He will then introduce the special musician of the day! It’s to be a surprise so we’re not telling! You gotta be there!


Open Rehearsal (12:30 - 1:30 p.m.) - Everyone is invited to find a seat in the theatre and take in an open rehearsal. The popular Pierre Simard (father of three young children – so he knows all about kids, families and music) will be directing the orchestra and the guest artist in preparation for the upcoming evening concert. Watch as the maestro works with the musicians to change a phrase here, add an expression there (and make notes in pencil on their music scores) - and have them playing perfectly to give the music the right feeling!


FREE TICKETS must be reserved for the Open Rehearsal by calling 250-754-8550.
Donations towards the NoteworthyKids Music Club are welcomed.
For information call 250-754-0177 or visit www.vancouverislandsymphony.com.
Keeping music LIVE!
Posted by Rosemary Phillips at 10:29 PM No comments:

B is for Brilliance with the Vancouver Island Symphony 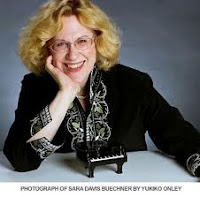 
Bursting with musical beauty, the opening performance of the Vancouver Island Symphony’s 2012-2013 Season, titled “Music is Life. Live it Here!” - is brilliant! Perfect for the classical connoisseur and for the new-to-classics and give-it-a-try audience, the concert brims with pure emotional and melodic magnificence as Maestro Pierre Simard directs the orchestra in B is for Brilliance on Saturday, October 20 at 7:30 p.m. in the Port Theatre.
Simard has created a bountiful program featuring the big B’s of the classical world – Bach, the original father of harmony; Beethoven and his turbulent emotions; and Brahms, the gentle and romantic humanitarian – by far, three of the greatest composers ever, each uniquely different, passionate and creative.
Bach – Johann Sebastian Bach (1685-1750) wrote the Passacaglia and Fugue in C minor for organ early in his multi-faceted musical career (here arranged for modern orchestra by Simard). It is one of his most important and well-known works. Orchestral versions of Passacaglia have been used in The Godfather and White Nights, and a jazz interpretation has been recorded by flautist Hubert Laws.
Beethoven – Piano Concerto No. 3, Op. 37 was written by Ludwig van Beethoven (1770-1827) when he was only thirty. It is a work rich in the turbulent emotions for which he was becoming known.
Buechner -  Guest artist and international pianist Sara Davis Buechner says, “It is in Beethoven’s 3rd that he achieved the epitome of the great classical concerto. It was his middle period; he knew exactly who he was with style and personality. There is utter perfection to the form and material.” Buechner, who has over 100 concertos in her repertoire and performs around the world, adds, “I often come back to the 3rd as my favourite of the Beethoven’s. When that piece is over and I’ve finished playing there is such satisfaction and contentment.”
Brahms – Often referred to as “Beethoven’s Tenth”, Symphony No. 1 Op. 68 by Johannes Brahms (1833-1897), was seen by the composer as an act of homage. Brahms was acutely aware of the deeply rooted traditions of Germanic music extending back not just to Beethoven, but beyond him to Bach and at first doubted his ability to write a symphony. He once stated, “You have no idea how it feels to hear behind you the tramp of a giant like Beethoven.” From the original sketches to finishing touches it took Brahms 21 years to complete this brilliant symphony that is filled with such beautiful melody.
B is for Brilliance - Three remarkable composers and one of the leading keyboard artists of our time – all whose surnames begin with the letter B - and all with remarkable life stories. To find out more, visit the Pre-Concert and Post-Concert talks. Then come and experience the music LIVE! That’s B is for Brilliance - music that touches all the emotions, performed with passion and precision by the talented musicians of the VI Symphony.

Posted by Rosemary Phillips at 8:08 PM No comments: