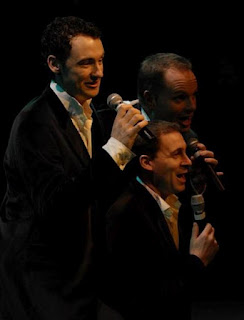 Celebrating St. Patrick and the Luck of the Irish
In a Benefit Concert for and presented by
The Vancouver Island Symphony
Thursday, March 22, 7:30 p.m.
Port Theatre, Nanaimo
Tickets: 250-754-8550
www.porttheatre.com
(The Celtic Tenors will be performing with their musical director and pianist Colm Rogan.


Coming all the way from the Emerald Isles the charismatic Celtic Tenors visit Vancouver Island in perfect time to help celebrate St. Patrick and all things Irish. 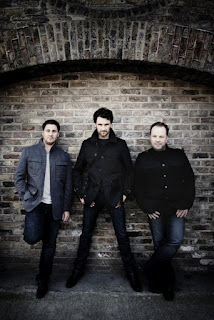 The globe-trotting Celtic Tenors bring their uplifting show to centre stage at the Port Theatre in Nanaimo on Thursday, March 22 at 7:30 p.m. Come and meet Matthew Gilsenan of County Meath, James Nelson of Sligo, and Daryl Simpson of Omagh in Northern Ireland. All classically trained, together as Ireland’s first cross-over tenor act (1995), they excel in stacked, three-part harmonies and quick witted banter between one-another and the audience – all delivered with their Irish brogue and rollicking good humour. Signed up by EMI in 2000, they have recorded eight albums, performed around the world, been seen on TV (including a PBS special) across the USA, Canada and Europe, and sung for world leaders, while pioneering a new style of ‘cool’ never before seen as they continue to break the traditional tenor mould.
While each of the Celtic Tenors has been influenced by the musical tradition from their own individual part of Ireland, Gilsenan (the more pop style), Nelson (the more operatic) and Simpson (the go-to guy for the high notes) show brilliant flexibility in melding their voices to suit spine-tingling classical, folk, Irish, Gaelic and pop songs that they love to sing.
It has been said that The Celtic Tenors do to Irish tenor singing what River Dance has done to Irish dance – bringing it to the 21st Century. “We sing the big tenor numbers but we also do songs from our homeland and other Celtic countries, and a bit of pop music - which surprises people. We present a complete mix of everything... and some in our own language. We are part of the modern, contemporary Ireland, a core of Irish-ness and Celtic-ness that needs to be cherished. In Nanaimo we will be performing songs from our new album ‘Feels Like Home’, tenor standards like Nessum Dorma and Celtic Tenor favourites like Going Home, Remember Me, Red-Haired Mary, Westering Home, Danny Boy and more.” 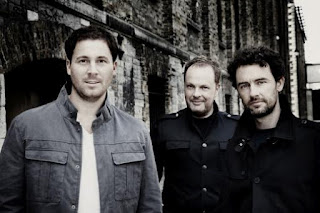 A concert with The Celtic Tenors is a journey through all the emotions and sometimes includes an orchestrated sing-along and an occasional visit into the audience. “We share with the audience a lot of experiences we’ve had. One minute they are laughing and the next cry a bit with memories that a song evokes.”


Come and celebrate the luck of the Irish in a concert sure to lift your spirits as the Vancouver Island Symphony presents this extra-special BENEFIT CONCERT - the Celtic Tenors singing Music for your Heart and Soul. Tickets are available by calling 250-754-8550.
For more information visit www.vancouverislandsymphony.com. Keeping Music LIVE!

Posted by Rosemary Phillips at 5:45 PM No comments:

An Incredible Evening of Magic with Murray Hatfield and Teresa 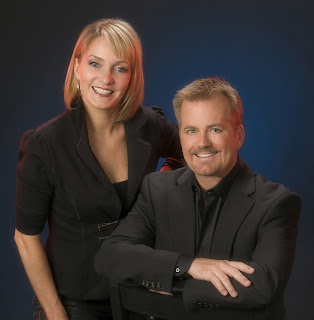 The Boundary District Arts Council -
2011-2012 Performance Series presents
Murray Hatfield & Teresa
“An Incredible Evening of Magic”
Thursday, March 1, 7:30 p.m.
GFSS Auditorium, Grand Forks BC
Tickets: Thistle Pot Gifts and Gallery 2
An Incredible Evening
of Magic
Magic! That’s family entertainment - spellbinding, heart-throbbing-in-the-throat suspense, uproarious laughter and brilliant surprises – as the Boundary District Arts Council’s presents their grand finale of the 2011-2012 Performance Series with Murray Hatfield and Teresa in an “Incredible Evening of Magic”.
On Thursday, March 1 at 7:30 p.m. the Grand Forks Secondary School Auditorium will be transformed into a world of jaw-dropping illusion. From the moment they take the stage, Murray Hatfield and Teresa thrill the audience with their award-winning mix of magic, music, dance, comedy and stunning illusions. Witness the instantaneous transformation of Teresa into Murray or watch as Teresa passes visibly and incredibly through his body. Behold as Teresa is ‘squished’ to just 12 inches tall, or see her vanish in the blink of an eye.
All this and more is possible when Murray and Teresa take the audience on an unforgettable ride of magic. Audience members beware! Volunteers become the true stars of the show as they assist with the magical mayhem - from a hilarious routine as a helper plays the part of the magician, to Murray's signature effect, a side-splittingly magical duel.
Murray and Teresa have spent the last twenty years travelling and performing around the world, thrilling audiences in Israel, Cyprus, Australia, New Zealand, Singapore, Mexico, Japan, Canada and the United States.  They also star in and produce "Magic and Miracles", the largest touring magic show in Canada.
And now they are coming to Grand Forks and the Boundary fall the way from their hometown, Victoria BC, for this one special performance! To book your seat on a magic carpet ride, visit Thistle Pot Gifts or gallery 2. Advance tickets are: Adults $18, Senior $16, Youth $5, Family $45. At the door: Adults $20, Senior $18, Youth $7, Family $50.
For more information about Murray Hatfield & Teresa visit www.murrayhatfield.com
Posted by Rosemary Phillips at 10:54 AM No comments:

Believe - with Ken Lavigne and the Vancouver Island Symphony 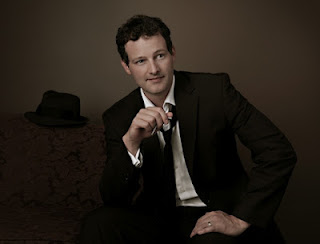 
Believe - a VI Symphony Valentine
Ken Lavigne, popular Vancouver Island tenor, believes!  So much so that he lives his hopes and dreams with all his heart. In a season dedicated to Music for Your Heart and Soul, the Vancouver Island Symphony, under the baton of Pierre Simard, presents a special Valentine treat - Believe.  On Saturday, February 18, the theatre will be filled to overflowing with love, romance, hopes, dreams and magnificent music with Lavigne’s amazing voice, his natural and charming rapport with the audience, genuine stage presence - and his heart.
Many will know Lavigne for his memorable trip to New York in 2009 when he went, against all odds, with one of his dreams (and many Vancouver Island supporters) to perform at Carnegie Hall, the world’s most prestigious concert stage. Accompanied by the New York Pops Orchestra under the baton of Simon Capet, Lavigne received three standing ovations and excellent reviews from New York critics.
“I had an epiphany one day,” says Lavigne. “Why was I waiting for something to happen?” And while one dream has been fulfilled, Lavigne continues to further his passion, performing with symphonies and orchestras internationally. “Since the Carnegie Hall concert I have made appearances in Los Angeles and Victoria with (Grammy winner) David Foster at the piano, and I’ve toured through the US. I want to take every opportunity I do have in front of an audience to make it as memorable a moment as possible. I believe that when you talk about following your dreams you leave people elated and inspired, that they too can do what they want to do, they can make their dreams happen.” Here Lavigne laughs, “You may have to work hard, and you may not end up where you envisioned, but it’s a beautiful ride and the destination is a good one.”
And as Lavigne follows his dreams his voice evolves. “It’s maturing with age like a wine. I’m at an age where things are falling into place; before, I would struggle for a particular sound, now it is happening automatically. The style of music is evolving and things are becoming easier... but that comes from hard work!”
Throughout a program of familiar ballads, show tunes and classical cross-over favourites (and surprises)  Lavigne weaves a thread, joining each song with anecdotes, mostly of the humorous kind, that have audiences rollicking with laughter. All the while it’s his music that will touch the heart, with a voice that Cabaret Exchange of New York describes as being like “...liquid gold.”
This is definitely music for the heart and soul. Tickets for Believe are available by calling 250-754-8550. For information visit www.vancouverislandsymphony.com. For Ken Lavigne, his formal biography and recordings, visit: www.kenlavigne.com. And for interview articles and a review visit www.quillsquotesandnotes.com/ws-lavigne.htm .
Posted by Rosemary Phillips at 2:07 PM No comments: 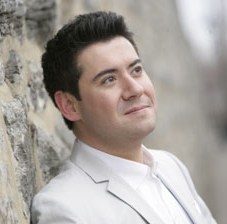 Meet Ian Parker, a member of the Parker family dynasty of virtuosic concert pianists who was born and raised in Vancouver, schooled at Juilliard in New York and now divides his time between performances around the world and his homes and studios in New York City and Vancouver. This coming weekend (February 10-12) the youthful, dynamic, flamboyant and expressive, globe-trotting Parker, who has just completed concerts in Bogota, Colombia, will be performing with orchestras in Langley, Surrey and Abbotsford, under the baton of violinist and conductor Calvin Dyck.
Rhapsody in Blue
Parker will be pulling out all the stops as he plays one of his (and audiences’) all-time favourites, Gershwin’s amazing, lively, rhythmic, sensuous and dramatic Rhapsody in Blue. Considered a musical portrait of New York City, it combines elements of classical music and jazz.
Rhapsody in Blue remains one of Parker’s most memorable pieces of music. “It was the first piece I ever played with an orchestra; the Vancouver Youth Symphony. I was sixteen. I have now played Rhapsody in Blue as my debut with most prominent symphony orchestras around the world.”
While the audience basks in the after-glow of Rhapsody in Blue, Parker then lets his fingers float over the piano keys with melodic passages from Mozart’s Piano Concerto No. 20, the concerto made famous in the movie “Amadeus”.


Top BC Talent - Guest Artists
Parker shares the spotlight in these concerts with exceptional BC talent and music by Wolfgang Amadeus Mozart. Flutist Paolo Bortolussi, a passionate and provocative performer of a wide range of musical styles, joins Maria Whelton, a harpist described as angelic, playful, bold and sensitive, for a performance of the Flute and Harp Concerto. Andrew Clark, an international French horn performer and recently welcomed addition to the BC music scene from London (UK), will play Mozart’s Horn Concerto. Also included on the program is the overture to the opera “The Marriage of Figaro” and a movement from the popular Symphony No. 29.


For more information about Ian Parker visit his web site at www.ianparker.ca and visit a series of interview articles at www.quillsquotesandnotes.com/ws-parker.com .
Posted by Rosemary Phillips at 2:00 PM No comments: