A Carol for Christmas - with Songs Strings & Steps


And the next famous Christmas Carol is...
They come from across Canada, the US and Fraser Valley – new Christmas carols to be performed by the Abbotsford Youth Orchestra and special guest artists during “A Carol for Christmas”, this year’s spectacular Songs Strings & Steps community Christmas concert (December 20 – 22) at Central Heights Church.


A carol competition!
There will be great entertainment, sets, props and costumes, comedy, drama, poetry, the traditional carols, a sing-along, and of course – surprises – but with a new and exciting concept! Says Calvin Dyck, Abbotsford’s forever creative and enthusiastic musical director, “It all started when I came bounding down the stairs with an idea – to host a carol competition!” The Songs Strings & Steps team pulled together a prize purse of $5,500, and in the spring of this year sent out word to composers, universities and various publications. “We got about 30 entries from around North America and had a jury choose the best eight.”


Local composers too!
While names were not included in the jury process (and will not be during voting) finalists include Larry Nickel, Stan Gubiotti and Karen Savage, all from the Fraser Valley!


Audience to vote
“We have four concerts this year (last year we had three and they were virtually sold out) and, like the popular TV shows, at each concert the audience gets to vote on their favourite carol and winners will be announced during the final show,” explains Calvin.


The next famous Christmas carol?
“The composers have all put in a lot of work; they were free to use their own text or an existing text with new music. There is one piece for choir and organ, one for choir and strings, one solo carol with guitar and strings and other combinations. They all have different orchestrations. You just never know where the next famous Christmas carol will come from – maybe Abbotsford!”


Another magnificent variety show with great talent
The wonderful soprano Alison Nystrom returns as featured soloist with the carol competition and for Rejoice from Handel’s Messiah. New to Songs Strings & Steps are the Pilkey Sisters, recent arrivals to Abbotsford – three sisters with perfectly matching voices. There will be excerpts from the Nutcracker performed by outstanding dancers from the Fraser Valley Academy of Dance, the Langley Cello Ensemble, soaring solos from Calvin on his violin, a featured brass ensemble, and Abbotsford’s newest choral sensation iSing along with additional community singers to form a mass choir.


Surprises, delights and treats
And of course, there are ALWAYS surprises! “Last year we had 1000 snowballs made of yarn which the audience was invited to throw. This year we have 1000 of something else – but that has to remain a surprise! And during intermission we have special delights. Following the concert, in the true spirit of Christmas, the audience gets to take home a treat.”

Posted by Rosemary Phillips at 11:43 AM No comments: 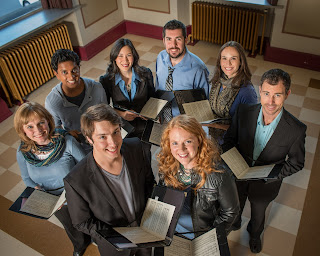 
Welcome! Come on in where it’s warm, cozy and comfortable! It’s a Christmas party – an Intimate Christmas party with the Vancouver Island Symphony! The halls of the Port Theatre will be decked out for the season on Saturday, December 15 as the VI Symphony presents their traditional family Christmas concert featuring joyous seasonal music, a cheerful sing-along - and surprises! Adding to the celebration are the young and exciting voices of Western Canada’s award-winning choral gem – musica intima.


Pure and beautiful - musica intima
Founded in 1992, musica intima has graced the stages of Canada’s best known festivals and concert halls. Their concerts and recordings are frequently heard on national and international radio broadcasts. “I originally heard musica intima in concert on CBC Radio while I was studying in Montreal,” says alto Melanie Adams, the East Coast member of this professional twelve-voice ensemble. “Their sound really struck me as being so pure and beautiful, blended. I thought as I listened; I could be happy singing with that group like that.” It was several years later and a series of coincidences that led Melanie to the West Coast in 2000 and a successful audition for the ensemble. “It was how they work, in consensus, that fascinated me, without a conductor. Every piece has a musical leader. We stand in a semi-circle and the audience becomes the 13th member.”


Music to get comfortable with
Like being curled up in front of a blazing Yule fire, this is music to warm the heart, from the traditional audience sing-along that includes Deck the Halls and Silent Night, to excerpts from Bach’s Cantata no. 132, Berlioz’ L’enfance du Christ and Gustav Holst’s Christmas Day performed in perfect harmony by musica intima. But let’s not forget the well-loved and soul-stirring music from Tchaikovky’s Nutcracker played to perfection by the musicians of the VI Symphony, under the baton of the illustrious and popular Pierre Simard. Then, with assistance from musica intima, comes the grand finale with excerpts from Handel’s Messiah, and the all-powerful Hallelujah Chorus! “I really love the Messiah,” adds Melanie. “I’ve performed it many times. It is amazing music!”


So come join the party, toast the season and the reason for the season, meet the musicians of the VI Symphony and singers from musica intima, and celebrate the joy of an Intimate Christmas with music and song - in total comfort.


Tickets for Intimate Christmas are available at 250-754-8550.
For information visit www.vancouverislandsymphony.com. Keeping music LIVE!
Posted by Rosemary Phillips at 11:36 AM No comments: 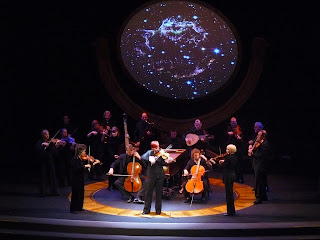 Music of the Spheres
Like a window to the universe the Port Theatre stage will resemble an astronomical telescope as the Vancouver Island Symphony presents Toronto's Tafelmusik Baroque Orchestra performing ‘The Galileo Project: Music of the Spheres’.


Science, music and storytelling meld together in this unforgettable concert as under a visual spectacle of stars and planets Tafelmusik, one of the world’s leading baroque and classical orchestras, plays music from some of the greatest composers of the 17th and 18th centuries.


Celebrating astronomy
Tafelmusik developed this fascinating fusion to celebrate the Year of Astronomy (2009) and the 400th Anniversary of Galileo’s first public demonstration of the telescope. Says Alison Mackay, the creative force behind this and other Tafelmusik projects, “One of our audience members, John Percy (Professor of Astronomy at the University of Toronto), suggested that the world of Galileo and baroque music would make a good concert.”


Journey through time and space
It took two years for Mackay to research and write the programme, choose the music and the visuals. “Each of the images, when put together with the music, becomes more than the sum of their parts. It is emotional for the orchestra to play music in such heightened context.” A team of top Canadian talent provided staging, projection, set design, construction and lighting. Says Mackay, “It was tremendously exciting, watching it come together.”


A choreographed orchestra
To complement the overall presentation, the orchestra took on the challenge of learning all the music by memory. “This has really freed us to move around the stage and communicate with the audience in a different way. Now we are choreographed!”


Calling all astronomers and music lovers
Since its premiere at The Banff Centre in 2009, ‘The Galileo Project’ has been to Asia, Australia, New Zealand, is now touring Western Canada. “Many astronomers are interested in music,” adds Mackay. “Galileo himself played a lute. Everywhere we have performed we have made links with the astronomical community. Sometimes they have even brought their telescopes for the audience to see.”


Not missing out on this exciting opportunity is the Nanaimo Astronomy Society. They will be in the theatre lobby on November 26 to show their telescopes – and after the concert, if the sky is clear, take a look at the stars!


Short videos of ‘The Galileo Project’ can be seen on YouTube - then come and experience the whole amazing show LIVE! To book your seat call 250-754-8550.


For more information about the Vancouver Island Symphony visit www.vancouverislandsymphony.com. Keeping Music LIVE!
Posted by Rosemary Phillips at 11:06 AM No comments: