Pure joy!
An interview with James Nelson of the Celtic Tenors
By Rosemary Phillips


Fabulous! Wonderful! Excellent! Phenomenal! Refreshing! Uplifting! Funny! Personable! They really connected with the audience! They were so good we didn’t want them to leave! - And so say hundreds of reviewers (on Ticketmaster) for the Celtic Tenors (Matthew Gilsenan, James Nelson and Daryl Simpson) and their recent block-buster tour with Celtic Woman through Australia and across the United States.
The phone rang promptly at 9 a.m., right on schedule, and there was James Nelson, founding member of the Celtic Tenors (1995), taking time to casually chat, in his gentle Irish brogue, about the group’s latest adventures and upcoming return to the Port Theatre in Nanaimo on Friday, November 20. It was like talking with an old friend, catching up on all the latest news since our interview of 2012. (To read a previous article – titled ‘Perfect Harmony’ - and a wee review - visit:  www.quillsquotesandnotes.com/ws-celtictenors.htm .)
Over the phone the excitement in James’ voice was noticeable. “Tomorrow we sing in Lafayette. We have never performed in Louisiana before. Now we can claim to having sung in 48 states in the US. At the moment I’m sitting looking over the skyline of New Orleans. Last night we went to listen to music. Today we’ll be going to Bourbon Street in the Old French Quarter for lunch, and tonight we are joining members of Celtic Woman at a Halloween Party – a completely alien concept to me. We’ve even got costumes!”
What a year: For the Celtic Tenors, 2015 has been extraordinary, as they travelled the world with their own show, released their latest recording, then joined Celtic Woman on tour. “It seemed like an ideal situation,” continued James. “It’s a bit different for us to be an opening act for others. Years ago we opened for Dionne Warwick and Air Supply, so it’s been a while. We have half an hour and feature some of the songs from our album Timeless, and finish with Nessun Dorma. Then, at the close of the show we join Celtic Woman for The Parting Glass, in seven-part harmony. It’s a rousing end.”
When they (Celtic Tenors and Celtic Woman) sang together at the end of the show, the entire crowd was spellbound. – Ticketmaster Review
Doing what they love – in harmony: Matthew, James and Daryl, all classically trained, Celtic crossover tenors, undoubtedly Ireland’s finest, love to sing – in harmony. And have fun! “We sing the big tenor numbers, but we also do songs from our homeland, and other Celtic countries and a bit of pop music,” said James who does most of the harmony arrangements. “We present a complete mix of everything... and some in our own language.” 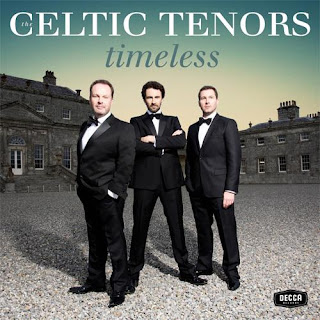 New record label: “Last year we signed on with Decca Records Australia through Universal Music. It’s the second signing with a major label in our careers. This year we released Timeless. It’s a very harmony-led album. The first song is Calypso by John Denver. The record company suggested it and we are really glad they did. We love it. It’s such a feel-good song. There are also songs by Dolly Parton and Bob Dylan, songs we grew up with. One favourite is In My Daughter’s Eyes. It’s just the most perfect song about anyone who has a child. We are doing it every night on this tour, and the audience loves it.”
The highlight for me was hearing them (Celtic Tenors) sing “In My Daughter’s Eyes” – beautiful. – Ticketmaster Review
“We also have a new Christmas album. We weren’t singing Christmas songs for the Celtic Woman tour, but the Christmas CDs were the biggest seller - they sold like mad!”
Now with 12 recordings and two PBS specials under their belts and over a million albums in sales (three platinums) these world-class tenors have, over the years, reached No. 1 Chart positions in Ireland and Germany, No. 2 in the UK, the top ten in US Billboard and Canadian charts and most recently charted No. 4 in Australia.
Much more than music: There’s so much more to the Celtic Tenors than concerts. Matthew is raising a family, with three children, and Daryl has now become a parent. Daryl continues his work with the Omagh Community Youth Choir, bringing young people together to promote peace and reconciliation through music. Meanwhile, James carries on with his project in Kenya. “I help raise funds for housing for children orphaned by AIDS. Besides being part of the building team I also teach music and do solo performances with the children. Many of those children are now in university. Two have received their diplomas as chefs, and others as primary school teachers and nurses. It’s lovely to see this with the children we have known. And a few of our tours have been linked to the Mercy Ships project out of Vancouver. It’s so nice to be doing something for others.”
Facing life: In addition, James, like many, has an ailing aged parent. “My dad has Lewy Body dementia. He’s gone through some awful phases. He was so incredibly fit until recently but is deteriorating. It’s so hard.”
Courageously living his truth: “I have always been very private about my life, but once the same-sex marriage referendum was passed in Ireland in May of this year, I was asked to tell my story. I was raised in a different era. I had been living a lie and tried to hide it for decades. The funny thing is that I came out to my close friends and colleagues 25 years ago, yet one or two of my close friends never knew. As a writer (Nelson’s Column for the Sligo Weekender) I already had the story in my head, so I wrote it and had it published. It was like therapy, and a release. I thought I would have a few negative responses - I was ready for that. But there were none. Not one negative. The response from people in letters, in e-mails and on Facebook, has been amazing. When we are on tour, radio stations have often asked, ‘Are you married?’ This year, in Australia, we did an interview with their main gay radio station. It was wonderful to just be myself.”
Returning to Nanaimo: “After a quick trip back home to Ireland we tour Canada and the US in November and December with our own show. And joining us on stage at the Port Theatre will be Colm Henry, our music director and pianist. All of us just love Vancouver Island.”
Presented by the Vancouver Island Symphony, as the first of their Special Concerts (without the orchestra), this will be the Celtic Tenor’s third appearance at the Port Theatre; the first was soon after the theatre opened, and the second in 2012 as a fundraiser for the VIS and to help Nanaimo celebrate St. Patrick’s Day.
Painting the Irish landscape: Three tenors – one voice – like painting the Irish landscape in song – and evoking the very soul of the Emerald Isle - Matthew, James and Daryl will whisk the audience away into a world of pure joy and perfect harmony in a concert sure to please every palate. I know – I’ve seen them perform - LIVE!
Tickets are available by calling 250-754-8550.
For more information about the Vancouver Island Symphony visit:
www.vancouverislandsymphony.com
For more information on the Celtic Tenors, formal biographies, videos and recordings visit: www.celtic-tenors.com and visit James Nelson on Facebook.
.

Posted by Rosemary Phillips at 11:45 AM No comments: